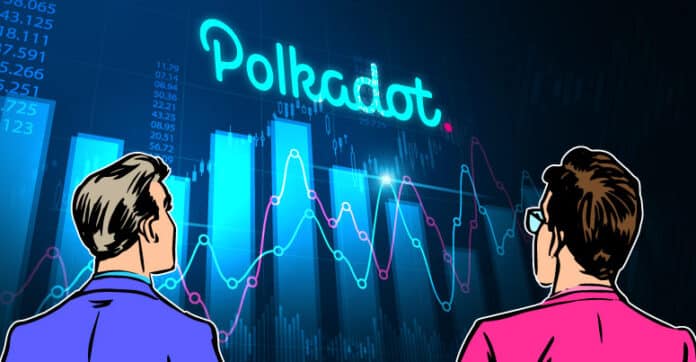 Not even a month since the new year began, the crypto industry is moving away from meme-coins towards the top dogs. The move is in anticipation of new changes in federal policies that could sway the meme-coins off the chart. The top altcoins like Ethereum and Cardano have been receiving a lot of mentions recently as viable alternatives for preserving the value of your investments. This article presents an addition to this above-mentioned list, Polkadot.

Ethereum’s layer-2 solution upgrade and Cardano’s Hydra upgrade are seen as potential catalysts for investors to seek refuge at them during turbulent times in the market. Along the same line, Polkadot also comes with a catalyst that is its interoperability which could bring the value of the coin to the moon in the possible future. The long-term investors who seek to buy Ethereum or Cardano in a market fall could also stack up Polkadot as it is predicted to fly on to an extraordinary price in the long run.

Polkadot is a crypto project based in Switzerland and works towards cross-platform communication. Aside from cross-chain connectivity, the project brings a peer-to-peer network with security towards high volatility in the market, making the Polkadot native coin, $DOT, an optimal option for long-term investments. With a circulation just exceeding 1 billion, DOT could by no means outperform its competitors but could make the investors regret not investing it in hindsight.

The parachain designs of Polkadot are seen as a potential project that would gain momentum in the future. The Polkadot blockchain has expanded from the main relay to add more parachains which can be leased to various startups and projects. As Polkadot seems to keep the pace towards cross-chain communication, it is currently one of the few chains that have shown considerable developments in achieving this goal. It has just finished the round 1 auctions for the parachains, and more such developments will only increase the value of the DOT tokens.

Amidst anticipation of a downward movement due to the federal fiscal policy changes, the interest rates are expected to go three times higher than they were. Volatile assets like cryptocurrencies are likely to get sold as a reaction to these changes. Polkadot would slide down to the range of $10 to $15 from its current price of $25. It would not be surprising if it went even lower before skyrocketing to reach new heights in the years to come. The DOT price prediction from CruptoNewsZ.com claims that the coins could easily double their current price by reaching $44 by the end of 2022.  A 5- year investment in DOT would bring 400% growth to your money as it is predicted to reach $100 by 2026.

Although the market anticipates a new set of regulations, no one is aware to what extent the federal policy changes may bring the markets to. However, the cryptocurrencies could remain under a fiscal grip given the hostile nature of the government towards virtual currencies. Naturally, bigger names like Ethereum and Cardano are widely considered to be the best options to withstand such situations. Polkadot joins the list with innovative and visionary projects that could help the coin get back up and sustain its value in the long run.