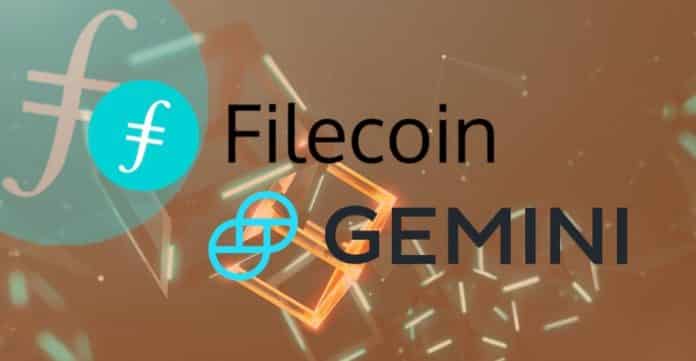 Gemini, the leading cryptocurrency exchange is working with regulators to offer support in trading Filecoin, as declared by the company in a blog post recently. It also confirmed that it will provide the custodial services for the protocol labs which had developed Filecoin (FIL) so that the asset can move forward.

As per the blog, Gemini is associating with the New York state department of financial services (NYSDFS) aiming to get approval to offer Filecoin trading services to its customers.

Gemini has also declared that its custody unit will be supporting the asset, to begin with. The release of the cryptocurrency’s mainnet is about to start conditionally sometime around mid-June and mid-July.

Gemini is popular for taking a regulatory and conservative approach in listing new assets in its platform. Consequently, Gemini’s attitude to list Filecoin would provide some clear views on how the US government takes into consideration the SAFT sales project 2017, which had raised more than 250 million dollars.

At the moment, there are just five assets available to trade on the platform; which include Bitcoin, Litecoin, Bitcoin Cash, Zcash, and Ethereum. By adding Filecoin, the tradable assets will come to six.

Relating to this news, Filecoin had declared that it is delaying its previous launch window by six weeks. At the time of phase 1 launch, the firm had released an updated roadmap stating that phase 1 was expected by the end by late Jan 2020, and immediately to start phase 2. The firm had also scheduled launching its mainnet in March.

As per the press release by the firm, the delay would necessarily allow more time for the development of the platform. It also stated that the outbreak of Coronavirus in China had immensely affected their community members who do not feel safe getting back to their workplace.