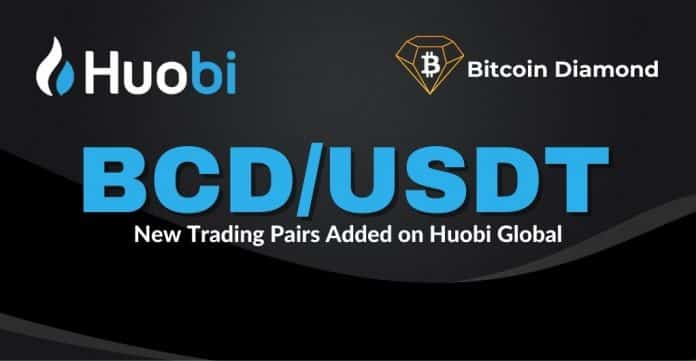 With headquarters in Singapore, Huobi Global is one of the leading trading platforms in the world. It is a cryptocurrency exchange with offices in Hong Kong, Korea, Japan, and the US. It is a safe platform for buying, selling, and storing cryptocurrencies like Bitcoin, Litcoin, and Ethereum. To introduce a better experience for users in trading and project liquidity, the Huobi Global has opened the BCD/USDT trading pairs.

What is Bitcoin Diamond?

Bitcoin Diamond or BCD is yet another cryptocurrency that was created way back in November 2017. The purpose of the new coin was to create an equivalent of bitcoin that will be cheaper, secure, and promise more anonymity. Compared to the more popular cryptocurrency – Bitcoin, the BCD has raised the block size limit to 8 MB, which will improve the transaction capacity, and the blocks will get generated five times faster. The cost of the BTC transactions is continuously increasing, and BCD seeks to reduce the cost related to transactions. The number of transactions and the amount on the wallet will always be encrypted, which affords greater privacy to the users of cryptocurrency.

The developers of BCD have always raised concerns about the insufficient privacy protection offered by its inspiration, Bitcoin. So the BCD has vowed to encrypt the maximum amount of information. But this decision reversed BCD looked for speedier implementation of Lightning Network. This step was always expected. There was a general belief that encrypting full data was not feasible as the governments would still want the cryptos to reveal these pieces of information mandatorily. But it does not mean that BCD is not safe to use.

Availability of Bitcoin Diamond The historic high of BCD was reached in the early part of 2018 when it was just below USD 1 billion. The present number of coins is around 153 million BCD.