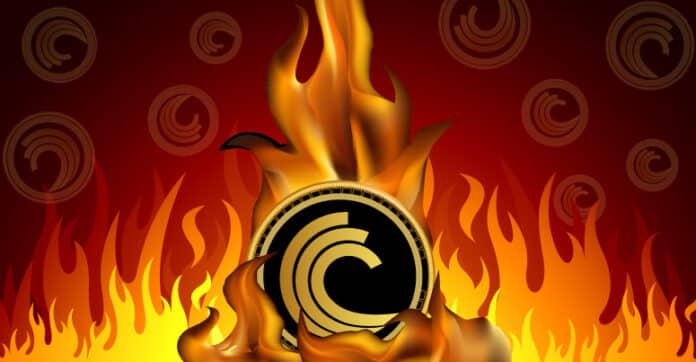 BitTorrent has revealed that it burned 58.5% of its total supply in the market, which roughly comes to 580 billion BTT tokens. The community said that this was a part of its redenomination plan while migrating from BTT tokens to BTTC.

990 billion BTT tokens were in supply before the community burned more than half of them.

The BTT Token, a TRC-10 token on the Tron blockchain, intends to construct an economy based on the token for bandwidth, networking, and storage of resources.

The token appears to have lost its momentum in recent days. The value rolled down by approximately 7.95% in the last 24 hours and 14.30% in the last seven days when drafting this press.

BitTorrent registered a market cap of $1,349,423,841 with a trading volume of $143,427,884. Despite BitTorrent portraying a gloomy picture at the moment, there are bullish expectations from the token.

It holds a lot of value for those looking to play a long shot instead of a short one. Features that keep the token a hot commodity in the market are its robust & high-bandwidth public blockchain platform, cryptographic methods that rely on zero-disclosure evidence, and boosting the power as a peer-to-peer file exchange protocol.

Since its inception, the TRC-10 token has backed numerous decentralized protocols and applications across the globe, including DLive, BitTorrent Speed, and BitTorrent File System, among many others currently in the pipeline.

Developers launched the mainnet of BTTC on December 12, 2021, with BTT redenomination. The coin has only gotten smarter since then to support TRON, Ethereum, Binance Smart Chain, and other decentralized transfers of assets with absolutely no restriction.

New BTT tokens have the following use cases:

The future is bullish indeed, with the maximum value expected to touch the mark of $0.0000086 by 2030. Traders are starting to trust the token, and there will be significant growth for long-term traders in the time to come.

Experts believe that a higher mark can be touched if BitTorrent breaks the psychological resistance. The process has started, but it has a lot of work to prove that the bullish rally is a reality.

Overall, the BitTorrent token appears to be a good investment with an optimistic future. Traders are still recommended to conduct their research and proceed with caution.