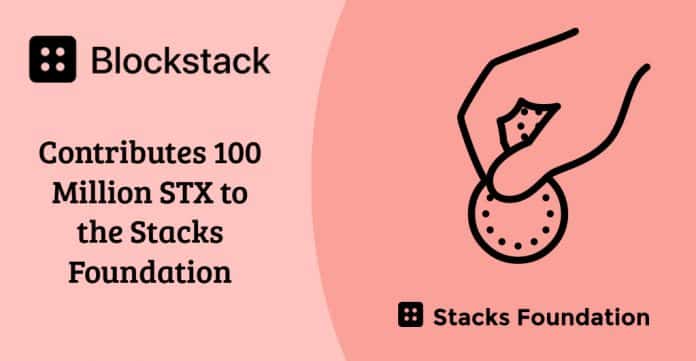 Blockstack, the Ethereum competitor powered by Bitcoin, has come one step closer in making its effort to decentralize its network and making its Stacks tokens tradeable on the US cryptocurrency exchanges. As of now, the Stacks tokens are not tradable in any of the US cryptocurrency exchange, because no crypto exchanges till now hold the license to trade securities in the US markets as per the regulations laid in by FINRA, the US financial regulator.

After launching the Stacks foundation, which is a non-profit organization based in Delaware, Blockstack PBC has announced to contribute 100 million STX tokens as initial resources to support the Stacks decentralized ecosystem.

As per the plans, Blockstack PBC will be transferring 100 million STX tokens, which worth approximately $23 million. It will also contribute 950K USD loan towards the working capital of the foundation and the IP rights for the different domain names like stacks.foundation, stacks.org, & stacksfoundation.com and for the Stacks 2.0 blockchain software.

With this contribution from the Blockstack PBC, the Stacks Foundation will continue their work to make the entire network decentralized and can also use the resources towards the blockchain research and education of both the developers and the users. Moving funds for the Blockstack PBC is considered as a giant leap towards decentralization.

To build an infrastructure for user-owned internet, single-party control of the ecosystem is not enough. Therefore, it needs to be distributed, which is made possible through this integration.

Blockstack PBS is making efforts to relieve itself from the risk of being crushed by the SEC for hosting unregistered securities sale. Therefore, it quickly arranged for an ICO and raised $23 million in 2019 and now providing support to the Stacks Foundation with this offering.