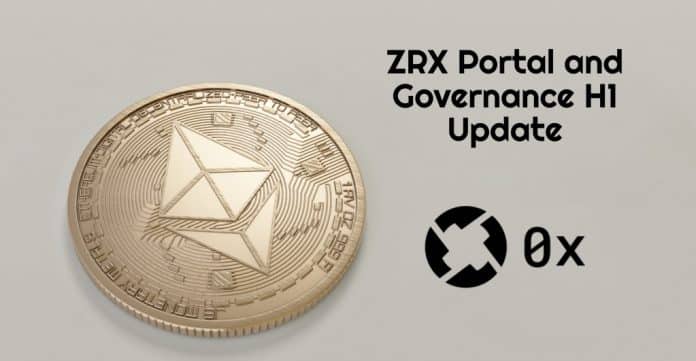 ZRX portal is an app that allows 0x users to vote on improvement proposals that have propagated over time onto the crypto ecosystem. The ZRX token holders also enjoy the liberty to delegate ZRX to the market maker staking pools for earning Ethereum powered protocol liquidity rewards.

According to the portal statistics, nearly around 1400 users visit the portal daily with a good number of 9000 weekly and over 28,000 monthly. Therefore, bringing forth the ZRX portal update is very important.

In its latest update, the ZRX portal has emphasized its engagement with the 0x community, which means investing more in the governance participation of the ZRX protocol. ZRX shared its 0x Governance 2 years ago, which focused on minimizing market disruptions, thereby drawing economic value from the portal. However, since its launch, it has been prioritizing on 0x governance where the entire decision-making power would lie on the community, including the administration of monetary treasury to upgrade ecosystem growth and the protocol development.

Accordingly, a ZEIP process was introduced into the system, which includes templates, categories, and standardized tagging, and the community accepted this proposal. This new staking system influenced 0x protocol governance. As of now, around 5037 token holders have staked around 21M ZRX with 0x liquidity providers. So far, over 800 ETH in protocol fees has been distributed. There has been a steady growth in the protocol fees that were collected; this did not change even after the protocol reduces the fee multiplier or after the 0x Labs team stopped subsidizing their rewards since May.

The second update in the ZRX portal came after the account page of the portal was fully revamped with the addition of new and advanced features. The new features help the users to keep track of their rewards generated as the result of staking. There are new rewards added for immediate withdrawal and also lifetime awards. A new ‘account history’ page has also been updated to help users keep track of the staking history, including the number of rewards generated per pool.

Now, the homepage of the ZRX portal displays the average rewards shared per pool that gives an idea to the token holders about how much average ETH was shared per pool. Previously, the parameter to count average ETH rewards per pool was very confusing, now with the addition of the new features, the average rewards generated per staking of the ZRX token has become quite clear and transparent.

From the latest updates, it is clear that the ZRX is a 0x community that is built for the community by the community. The on-chain ZRX token voting scheme, together with properly crafted incentives, can provide for effective decentralized governance, which is proved aloud by this latest update. The introduction of the new ZRX tokens also ensured the convergence of the token distribution with the stakeholders of the ZRX protocol.

The ZRX team is now planning to maximize the on-chain portion of the governance system in 2021, but that is a long road ahead and needs more contribution from the community as a whole.