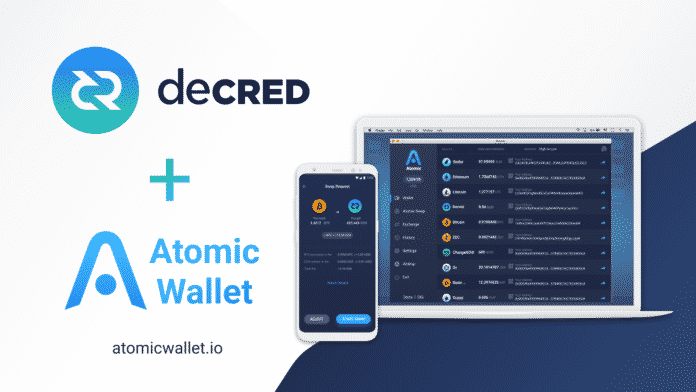 Atomic Wallet is a multi- crypto assets storage looking to provide users with a solution to exchange coins without the need for middlemen or the third parties. It is by integrating a new technology called Atomic Swaps. The promise is to provide unlimited cross block chain exchange with a fixed and small fee for any amount. It is only without depending on the centralized exchanges.

The people who have or who want to store their DCR’s in this wallet can now do it by only downloading the latest version for their OS. That is Windows, macOS, Debian, Fedora, and Ubuntu. A mobile version for iOS and Android is on development.

Now the users will be able to send and receive DCR within their wallet. Multi- cryptocurrency wallet Atomic has recently announced it has added Decred to its more than 300 supported cryptocurrencies and tokens. The statement was made via Atomic’s official Twitter account.

The tweet is “warm welcome @Decred Project in the multi-asset @atomic wallet! #decred is the self- governance blockchain and pioneer in #AtomicSwaps. Managing and exchanging $DR in our handy, secure interface,”

The team behind the so-called ‘digital currency for the people’ was pleased with the announcement. “Atomic Swaps and #Decred go together like pineapple and jalapeno peppers on a pizza. So we are happy to be included in the new release of @Atomic Wallet, said via a Twitter account.

On the supported assets section of Atomic’s wallet website, it is clearly stated that Decred is available not only for sending and receiving but also for being exchanged with other cryptocurrencies. Thanks to the integration of crypto- exchange shapeshift and change within the wallet.

Atomic Swaps are presently unavailable in the wallet, but it should not be for so long. It has been reported that Decred has added Atomic Swap for its token and it is readily exchangeable with the Bitcoins and Litecoin via text-based tools. The Decred team develops it. It is, however, a future Decredition release will see these type of tools integrated into its GUI.