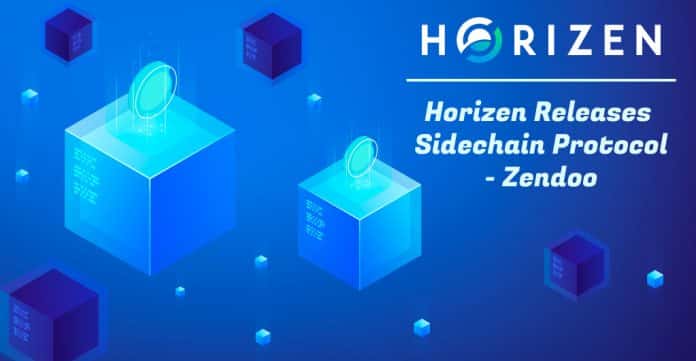 Horizen (Zen), the first cryptocurrency with full end-to-end encryption, has announced to release its first fully decentralized and customizable sidechain protocol, named Zendoo. As per the announcement, Zendoo will enable businesses to create both private and public blockchains affordably onto the Horizen network.

Sidechains are an innovative concept to improve blockchain scalability and extensibility. The basic idea is very simple, a sidechain is created by building a parallel chain with all the desired features in it, and then provide a way to transfer coins between the sidechain created and the mainchain of the network.

Sidechains derive the benefits of security and decentralization from the underlying main blockchain network to maintain the flexibility of real-world cases. Therefore, adding or removing features onto a sidechain does not necessarily depend on the community consensus of the mainchain, because the addition of new features will only affect sidechain users. However, new features can be added to separate the sidechain ledgers, thereby reducing the stress on the mainchain to a manifold.

Likewise, Zendoo can also be built parallelly on the mainchain architecture of Horizen supported by its network, which is also supposed to be the largest node network of the blockchain industry.

Zendoo was created as a unique scaling and sidechain solution by the engineering team at Horizen that comprises experts in the field of cryptography and blockchain. The system architecture at Zendoo allows the protocol to stress over functionality rather than on the choice of design. Therefore, it enables the network to deploy any type of rules, whether a blockchain or any other sort of computing system as a sidechain.

Horizen focusses on maintaining its sidechain’s privacy through the implementation of zk-SNARKs, which is a privacy technology of Horizen to enable verifiable cross-chain communications across the network. The zk-SNARKs technology helps the users to create easily auditable applications for addressing scalability issues of a network.

Ever since Horizen came into the market in the year 2017, the team has been trying to create something innovative that can address one of the biggest bottlenecks existing in the blockchain industry- scalability and application privacy issues. The release of Zendoo is a giant leap towards that development, and as such, it is one of the biggest milestones that the network has achieved. Even though Zendoo has been released in the “beta version,” there will more updates anytime soon.

As per Uri Stav, the Chief Security and Development Officer at Genesis,

Zendoo is the first-ever sidechain protocol on the Horizen network that has morphed Zen from being a mere cryptocurrency to becoming a highly privacy-preserving platform. However, this is to be remembered sidechains cannot derive 100% of the mainchain security. For this, they will require dedicated nodes; incentive mechanisms can be created to support the sidechains that are built on the top of the mainchains.