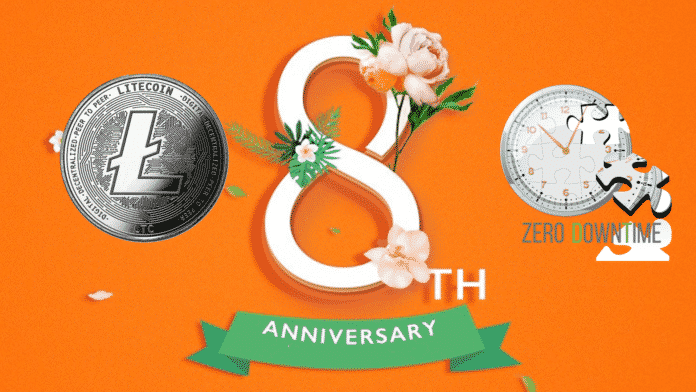 At present, the crypto market isn’t spacious enough to sustain even a fraction of coins and tokens listed on its exchanges. So, the test of time brings out the sturdiest of them.

Back in 2013, seven cryptocurrencies were listed, and now amidst 3000+ coins, only two of them are still standing on the top 300-BItcoin (BTC) and Litecoin(LTC).

Litecoin, the 6th largest cryptocurrency in the industry, celebrated its 8th birthday on October 13. It was initially released on October 7, 2011, via an open-source client on GitHub, but the public launch was a few days later, on October 13, marking the birth of the O.G. altcoin, which is currently valued over $3.65 billion. These days, one can purchase LTCs at $57.5 each.

The birthday celebrations commenced with a tweet from the Litecoin creator, Charlie Lee.

Even though LTC has always been in the shadow of Bitcoin, still its journey has been extraordinary. Before with the advent of Ethereum (ETH) and Ripple’s XRP, Litecoin steadily occupied the second most traded’s spot, right behind Bitcoin.

Combating many superfluous FUDs, since the opening of the year, LTC has gained 88% to its current levels despite the massive 60% correction from its 2019’s high of $145.

Lee and the Foundation will be hosting an expensive-looking Litecoin summit at the end of October to renew interest in the project and to discuss and clear up some of the superfluous FUDs, which has been plaguing them for quite long. The summit would house some of the heavyweight speakers like Anthony Pompliano, Ron Paul, Mati Greenspan, and needless to say, Charlie Lee, himself.

A lot has happened in 8 years, we have seen two major bull market cycles that have propelled crypto to the forefront of public consciousness and new technologies such as Segwit, Lightning, and MimbleWimble emerge advancing the usability and prospects of the space,

Nonetheless, the silver to bitcoin’s gold was the only cryptocurrency apart from Bitcoin, to not fall below the all-time top 10. It is still one of the most traded cryptocurrencies after Bitcoin and Ethereum with the trade volume to reach $2.18 billion in the last few weeks (back in December 2017, it reached a price of over $360).

Presently, the Litecoin developers are working to make the cryptocurrency more sturdy and private by adding confidential transactions. It has survived 8 long years, and has outlived many, and would also likely be around for a while regardless of what the critics think.