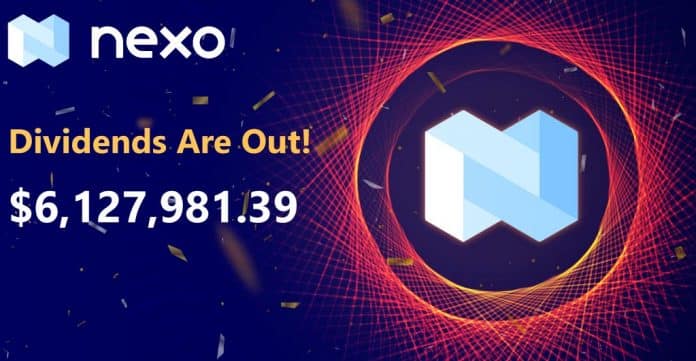 Nexo, the leading digital assets platform, has announced to distribute the Third Nexo Dividend amounting to $ 6,127,981.39 amongst the eligible NEXO Token Holders on August 15, 2020.

The year 2020, has been a great year for Nexo in terms of tremendous achievements that led to its success in paying dividends to the stakeholders. At the most trying times, when most of the companies have cut their dividend rates to as much as 57%, and some of the companies could not even issue dividends this year, it is a great milestone for the company.

Other significant accomplishments of Nexo this year, are the launch of its new website along with its partnerships with big market players like Chainlink and Circle’s USDC, lowering its lending rates to just 5.9% which is the lowest in the ecosystem, and the launch of its much-awaited “Earn on Crypto” app that will allow trading of all significant digital assets like Bitcoin, Litecoin, Dash, etc.

Nexo’s sustainable business model helps to bring stability to the blockchain ecosystem, thereby attracting more and more people within its periphery and paving a way to the wider adoption of digital assets in a more trustworthy and viable way.

The share of the Loyalty Dividend will never be less than 1/3 of the total dividend amount. However, this year to make the Third dividend payout more profitable for the stakeholders, the company has decided to offer an extra 20% bonus on top of the normal Base and Loyalty dividends.

Therefore, the full 120% of the dividends comprising the Base and the Loyalty dividends along with the additional 20% dividend would be unlocked on August 15, 2020. Those token holders holding more than 100,000 NEXO tokens and choose to HODL their payout in their accounts until August 15, 2021, are eligible for this full 120% dividend.

Moreover, all Nexo tokens that will be locked in during this one year will be eligible for the company’s 4th Base and Loyalty dividend payouts. To receive the dividends, all the NEXO Token Holders are required to stake their tokens on the Nexo platform on or before August 15th, 2020.

Apart from offering these lucrative dividends to the token holders, the company also has other surprises for the investors. Nexo token holders from now onwards can stake their tokens and receive a 50% discount on their credit line interest.