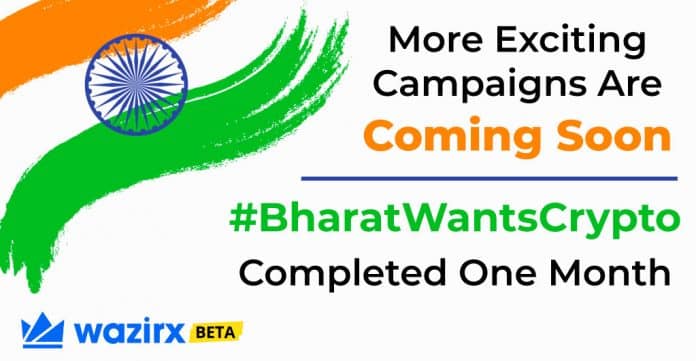 The hashtag #BharatWantsCrypto has been trending on Twitter since this campaign went live last month. Launched by WazirX, the purpose is to enable Indians to develop an interest in cryptocurrency even if they are not very conversant with the English language. Those at the forefront of this revolution are crypto enthusiasts, influencers, and investors. Many participants have created videos in their native language so that the community might understand more about this virtual currency.

WazirX has been at the forefront of the cryptocurrency scene in India. The company launched the first P2P (Peer-to-Peer) engine in India when the Reserve Bank of India (central bank) stopped all banks in the country from dealing in cryptocurrency.

Not only India but billions of people all over the world are also deprived of the digital currency environment simply because of the statutory obstacles in fiat-cryptocurrency conversion. This is especially true for people in the underdeveloped and developing countries who form a major percentage of the global population. Problems with banking delays and stringent laws that act as a dampener to cryptocurrency trading have contributed to people, in general, being ignorant about the intricacies of the crypto scenario.

These are some of the reasons why WazirX has found it necessary to interact with India’s people through #BharatWantsCrypto and expand their awareness of the subject.

The crypto scene in India has been on a roller coaster ride. In April 2018, the Government of India banned the banking industry from providing any crypto-related services to their clients. A lawsuit against this ban was filed in the Supreme Court, which in March this year overturned the ban much to the joy of crypto enthusiasts the world over. It held the Central Bank ban as unconstitutional.

Soon after the ruling, the National Association of Software and Service Companies (Nasscom), a major branch of the Indian Information Technology and Business Process Outsourcing industry tweeted,

The happiness, however, might be short-lived. The Government of India has formed an inter-ministerial committee to frame laws to ban cryptocurrency trading in India, which might be ratified by Parliament in its next session. It will be a huge setback for the industry, which had a high growth rate even during the lockdown after the cancellation of the ban by the Supreme Court.