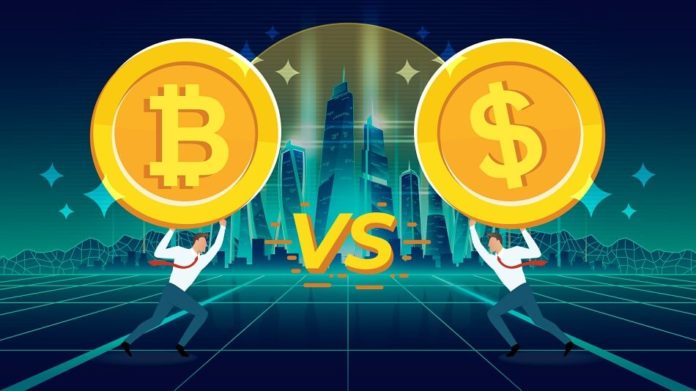 Could Bitcoin ever replace US Dollar? Well, industry experts have a divergent opinion over the Bitcoin’s future.

Some are affirmative, whereas some are skeptical over its future performance. Bitcoin has had performed very well in the past years and has maintained its top position among other cryptocurrencies so far. Though very recently, it has witnessed downfall as well, it’s still standing tall with the highest capitalization in markets.

With the rapid pull of turnover in the crypto industry, it is expanding rapidly and now the analysts are predicting that Bitcoin may replace fiat currencies like the US Dollar.

As per the speculations, owing to the global economic reconstruction, the global reserve system will face a radical change in a few decades.

Coinbase’s Co-founder and CEO, Brian Armstrong, affirmatively predicts that Bitcoin may replace the fiat currencies by 2030. In July 2019, Armstrong commented that Bitcoin could surpass the dollar as reserve currency within 10-15 years and the world’s largest crypto company Coinbase has a rough plan to make it happen. Bitcoin faces some challenges to achieve this goal, though.

HODLERS are other big supporters of Bitcoin who are confident that Bitcoin will become a global reserve currency and will replace the US dollar, which will be sure a bitcoin lottery for them as well.

There are central authorities like bankers, politicians, and economists who conceive Bitcoin as a major threat to economies as they can generate infinite money.

Position of Bitcoin in Markets

Any Medium of exchange has to be stable in markets, unlike cryptocurrencies. Bitcoin has been speculative with a reputation of being highly volatile over the years. Starting from zero price value in 2010, it has witnessed a 2000% rise in 2017, going up from the US $975 to $20,000. Such volatility makes it not suitable as a medium of exchange. However, it has also maintained stability of-late. Several industry experts believe it as an indication of gaining maturity of the currency.

In 1971, US President Nixon officially stopped the US dollar from being the Reserve currency by ending the convertibility of the dollar to gold to provide more power to the fiat currency to influence the inflation and overall economy.

However, as the US is the largest economy and a prominent trading nation, other nations hold more US Dollar reservoirs as a safe option to gain stability and for the convenience of businesses.

Thus, the US Dollar has ruled the world economy almost for a century taken over from the British Sterling after World War II.

Business data from the last five centuries indicate that the average life span of a reserve currency reigns around 95 years, which seems to be true in the case of the US dollar. It has over 60% reserves in foreign exchanges, whereas the influence of US Economy output over the world markets has decreased to less than 25%, which may fall more.

Owing to the above global scenario and position of Dollar in the world markets, the narrative of Bitcoin popes up louder than ever.

Bitcoin as a Reserve Currency

Bitcoin is a decentralized and peer to peer mode of payment. Bitcoin can be called as a fusion of commodity money and fiat money. It is still considered as a speculative investment due to high volatility but great returns.

After the news hit the markets that French BNP Paribas aspires to integrate Bitcoin into its currency funds, Armstrong’s comment came in as a new possibility about Bitcoin.

Very recently, last month, Bitcoin price has again slashed down. Though market analysts see other reasons for this downfall, the crash might be a response to the hard fork scheduled in November, which possibly split the Bitcoin Cash into Bitcoin ABC (core Bitcoin cash) and Bitcoin SV or due to the recent huge selling of techno assets.

If the demand for the Bitcoin rises steadily in the future, it could surpass the supply, which may lead to the deflationary effect. This effect may promote Bitcoin more as an investment rather than as a medium of exchange.

Bitcoin emerges as a promising option with the long-term value, though the industry experts have no consensus over its promising future in this capacity.

Bill Gurley, a Venture Capitalist, believes that Bitcoin can be a great store of value option for the countries where there is consistent political anarchy owing to which their native currencies constantly face a threat of crumbling down overnight.

Bitcoin faces tough competition from other cryptocurrencies as well, but it surely is creating ripples across the globe. Whether it will replace the US dollar in the future is still in vogue, the supporters need to promote it to reach its fullest potential.