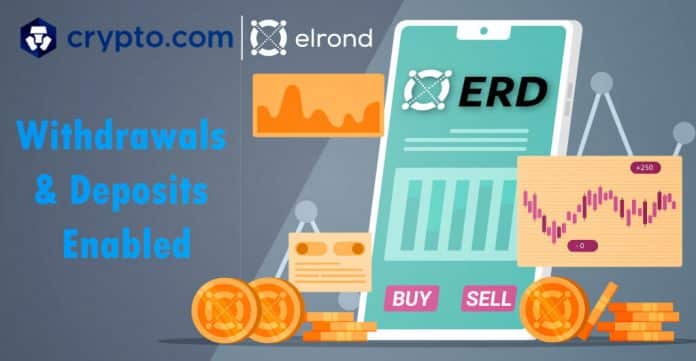 Crypto.com, one of the leading platforms that allow buying and selling of cryptocurrencies using fiat, has announced its support for Elrond’s ERD token transfers on its platform. Regarding this collaboration, the CEO of Elrond, Mr. Beniamin Mincu, said,” Convenience is the key that will lead to unprecedented growth for the Elrond ecosystem. Three million users can now acquire, exchange, and transfer ERD tokens in 100+ markets via Crypto.com, making this one of the simplest ways for the US and other communities around to world to join the Elrond ecosystem”.

Elrond is a public blockchain network that is designed to create a highly scalable decentralized network that can give fierce competition to centralized networks that, too, with greater privacy. The cryptocurrency market has always been infiltrated by limitations on its scalability, cross-chain interoperability, security issues, and third-part adherences; the Elrond network has been designed to overcome these problems and to provide a more adaptive decentralized ecosystem.

The Elrond ecosystem is built on the “sharding mechanism” and a Secure PoS algorithm that enables linear scalability with a more efficient and secure consensus mechanism. Therefore, compared to any centralized ecosystem, the Elrond decentralized ecosystem can process at least 10k transactions per second, at a negligible cost and reduced latency, thus disrupting the centralized internet economy.

The wallet space is divided into the required number of shards following the Binary Tree Mechanism. Then each node is rewarded through maintaining architectural equilibrium, thereby reducing the latency. Each node is ensured security with the help of the PoS mechanism.

This new partnership will allow millions of Crypto.com users to get unlimited access to the ERD tokens. Crypto.com has over 3 million users, and its popularity is owed to its highly intuitive interface and its operational VISA debit card that can be topped up with cryptocurrencies. It was established in 2016 in Hong Kong to provide its users a powerful alternative to traditional banking services and is the first cryptocurrency company in the world that has an ISO certification ISO27001:2013, CCSS Level 3, and PCI: DSS 3.2.1, Level 1 compliances.

Elrond supporters will also get to access 100+ more markets as part of the newly formed ecosystem and can spend ERD tokens everywhere through their MCO VISA Card. The support of Crypto.com was important to let the beginners take advantage of the PoS economy of Elrond and also for getting chances to earn some passive incomes.