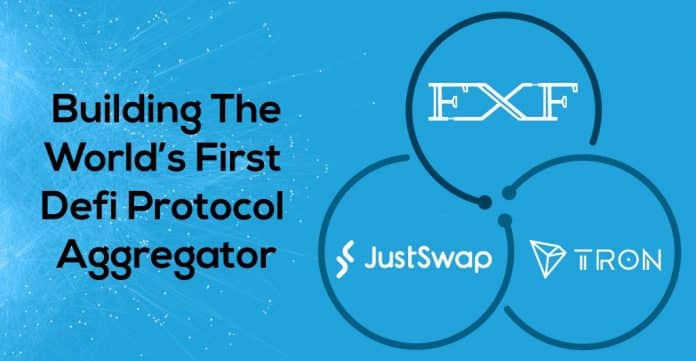 In a significant announcement that is set to revolutionize DeFi on the TRON ecosystem, FXF has announced a linkup between JustSwap and TRON that will build the first DeFi Protocol Aggregator in the world. They will collaborate towards strengthening DeFi advancements with cutting-edge technologies while working together in the areas of marketing and commercial development.

The development was further confirmed in a tweet by FXF.

TRON’s CEO, Justin Sun also made a parallel announcement that confirmed an alternative to Uniswap, which is named as JustSwap. This protocol would be introduced on August 18 and will help solve the issue of liquidity.

The protocol would have several unique features. It would permit the exchange of ERC-20 tokens but without buy or sell orders. Also, since the exchange would be made without an intermediary as per the functioning of DeFi, no fees would be payable.

Even though the TRON Foundation introduced JustSwap on August 18, CEO Justin Sun has informed the crypto community numerous times in the past of its impending launch. It is the TRON’s 1st token exchange protocol.

JustSwap will let users be liquidity providers too. They can earn mining rewards and trading fees and will be offered incentives. This is against the traditional cryptocurrency exchanges that take fees for trading.

Elaborating more on the launch and the more delicate intricacies of the decentralized token exchange protocol, Justin Sun said that JustSwap would be a critical gateway for the Just (JST) project. Users may borrow USDJ using TRX as collateral. When repaying the borrowings, users have to pay the USDJ plus a stability fee. This process would be a perfect decentralized token exchange for Just (JST) users.

FXF (Finxflo), which first announced the launch, is a money market protocol aggregator. Its primary focus is to guide investors to get seamless access to the best cryptocurrencies, DeFi rates, and prices, regardless of where they might be located. FXF is based on advanced technologies that seek to empower crypto assets, users and holders, with a high level of transparency, information, and liquidity. Its USP is that it offers users a matchless trading experience customized to meet individual requirements.