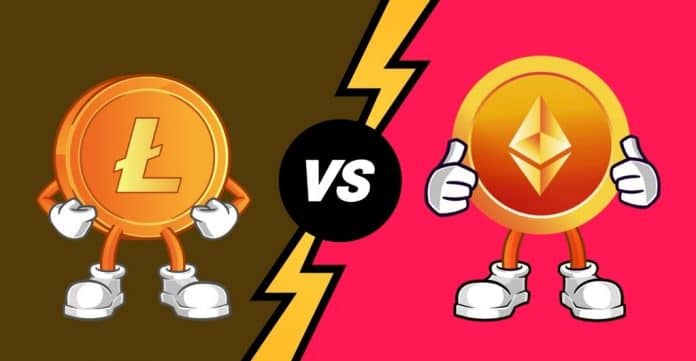 Ethereum is an open-source platform, which uses public blockchain and allows its users to develop decentralized applications (dApps). Like Bitcoin, Ethereum has its native coin called Ether (ETH). On the other hand, Litecoin is an open-source global payment network that any monetary authority or centralized government does not control. The primary purpose of Litecoin is to be accepted as a currency. Litecoin is a peer-to-peer interface, similar to Bitcoin and Ethereum, that enables anyone to download the code, register with the network, and start mining the Litecoins.

Technological Differences Between Litecoin and Ethereum

Ethereum is an open-source blockchain platform. Its functions are based on several systematic algorithm calculations. On the other hand, Litecoin was created as a cryptocurrency intended to facilitate transactions between the parties, eliminate difficulties, and improve efficiencies at a low rate.

One of the limitations of Litecoin is the number of coins released. It is capped in such a way that no new coins can be added to the system. Contrarily, Ethereum has a different model that permits releasing any number of coins every year.

The reward for Litecoin and Ethereum is based on the proof-of-work (PoW) concept. For a verified block, Litecoin rewards 25 LTCs, while Ethereum rewards 5 Ether. In Ethereum, new coins can be generated, but the Litecoin transactions are based on the customer ledger.

As compared to Litecoin, Ethereum processes more than 20 times more transactions every second. The Ethereum network has a unique technology along with a strong community of supporters and developers. The block time required for Ethereum is 14 to 15 seconds, while for Litecoin, the block time is 2.5 seconds.

Differences in Return-on-Investment (ROI) for Litecoin and Ethereum

Litecoin and Ethereum have been a significant part of the cryptocurrency world since early on and have established a strong rapport with followers, developers, and dedicated teams. They are available on almost all the exchanges. Litecoin had proven that it is the best investment option given its fundamental strength and technical signals. Further, Litecoin is emerging as a vital asset and has built a strong base even in the bearish market. It is an excellent investment choice to get good ROI in the future based on its upward trend.

On the other hand, Ethereum had performed well over time in the cryptocurrency sector and developed. Ethereum’s higher risk profile brings with it higher rewards and growth potential. Investors have considered its tremendous growth in DeFi in the current period of volatility, which has brought higher ROI for its investors.

Litecoin vs. Ethereum as a Mode for Payment

Ethereum has faster blockchain generation time, and it can be used as a quicker means of payment than Litecoin. Simultaneously, Ethereum has a more complex system, and many transactions occur in a second. As a result, the network can get riled up very quickly. The Litecoin block stores the data concerning only payments. So, the users are less likely to encounter transaction delays. It will still be slower than Ethereum if the blockchain is extensively used on a particular day. Litecoin can be used for payments, and Ethereum can be used to develop applications potentially.

Litecoin vs. Ethereum – Store of Value

It is observed that Litecoin’s price can increase in value as it is a deflationary currency. On the contrary, the other coins have an inflationary model. So, it is said that Litecoin has a great store of value. But, one should remember that Litecoin is a cryptocurrency and should be widely used to have more value.

As per the market capitalization, Litecoin is one of the top 10 cryptocurrencies, offering a long-term value. This is the reason why LTC Forecast can go very high. Litecoin gets its additional value as compared to Bitcoin. It is often referred to as digital silver when compared with Bitcoin’s digital gold. Both Bitcoin and Litecoin have a hard-capped supply, providing these assets a shortage aspect. This is similar to the case of precious metals. At the beginning of 2021, Litecoin reached an all-time high record price that was set in 2017. This can also lead to a definite uptrend shortly.

Ethereum has been on a positive note and is speculated to have a bright future. It is also believed that it can successfully perform as an investment asset. Ethereum has a potential for high growth, which is a result of decentralized finance, DeFi. This has also increased the demand for Ethereum in recent years. Ethereum’s pattern as a cryptocurrency is more impressive than Bitcoin. Experts have predicted that Ethereum price will remain bullish.

Ethereum and Litecoin have proved among the top-ranking digital assets in the cryptocurrency space. Despite their popularity, their functions remain different. Litecoin was developed for making payment utility when compared with Ethereum. Further, Ethereum is not just a mode of payment but also serves as an innovative contract platform. Even though cryptocurrencies are still new, the future might bring about unique aspects on various cryptocurrency platforms, as the technology is volatile, and so is the pricing.