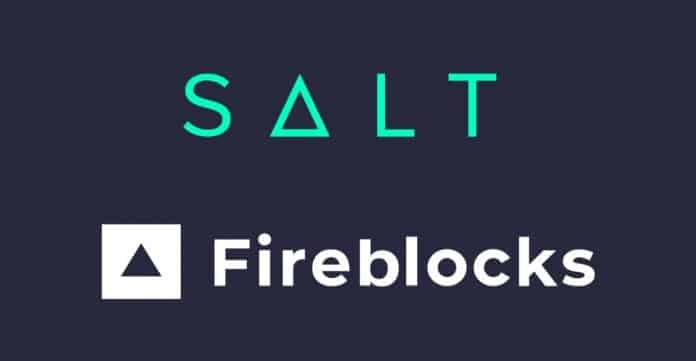 Crypto lending network SALT Lending announced on Friday that it has partnered with New York based digital asset security protocol Fireblocks. In the official Twitter thread, SALT stated that the partnership is a part of the first-ever distributed custody model for storing collateral digital assets, and will allow SALT to enhance the asset security and lower their costs.

For the past few months, DeFi has been one of the hottest topics in financial circles globally, and crypto lending plays a big role in the segment. SALT, being one of the most reputed names in crypto lending, would want to gain as much share of the growing demand as possible. This makes enhancing security and controlling costs vital for growth and development.

Further in the thread, SALT informed that its users will now get access to better security, faster services, and low interest rates on borrowings. Justin English, CEO of SALT stated that the collaterals have moved far ahead since the time SALT was launched in 2016, which makes it important to ensure the safety of the customers’ collateralized assets. He further said that working with Fireblocks will help them streamline their operations and introduce wealth preservation products on their network. Adding that security is their top priority, Dirk Anderson, CTO of SALT said,

Fireblocks provides enterprise grade blockchain security infrastructure solutions, specifically focused on issuing, moving and storing crypto assets. The platform combines Multi-Party Computation and Intel SGX technology to provide best in class proprietary defence mechanisms for digital assets. This allows Fireblocks’s clients to scale and accelerate their operations by eliminating the reliance on physical hardware. Commenting on their partnership with SALT Lending, Fireblocks Co-founder and CEO Michael Shaulov said that they will help the crypto lender to expand its operations by strengthening its security and reducing costs.