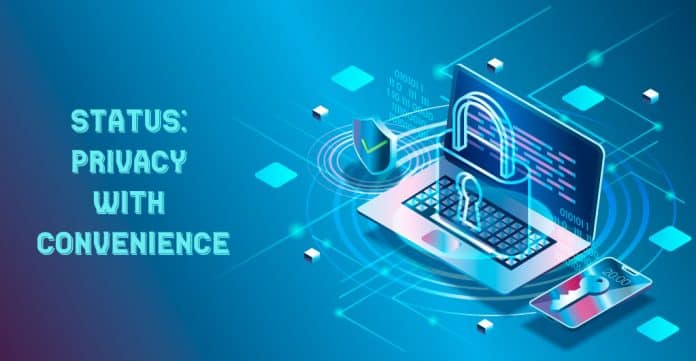 The Status messenger app is a secure communication tool, crypto wallet, and web3 browser all on the same platform, that is designed to protect your messages from third party intrusions. It is based on the decentralized P2P technology that prioritizes preserving the privacy of information instead of using PIN related features or phone number of the users in the name of providing convenience- this is where Status differs from other popular messaging apps like Signal.

The Signal is also an open-source privacy-preserving messenger which is developed by the Moxie Marlinkspike’s Signal Technology Foundation. It has more than 15 million users and is endorsed by big names in the market like Edward Snowden, the former NSA contractor, Jack Dorsey, the CEO of Twitter/Square, and several other leading security researchers.

The Signal messenger is recommended by big organizations like the EFF (Electronic Frontier Foundation), ACLU (American Civil Liberties Union), and the European Commission, etc. owing to its focus on privacy and security. Despite all these recommendations from the big players of the market, Signal faces fierce competition from the Status messenger app in providing privacy without compromising the convenience factors of the users.

Using Cryptographic keys as identifiers instead of user’s phone numbers

Every messaging app needs a user to create a unique account that will be used to connect him to his contacts saved on his phone. To create this unique account, one needs to provide his phone number, and according to the Status messenger team, this is where the users’ privacy is compromised. Matters become worse when a user uses a single phone number everywhere, be it for personal purposes or official issues because it is not always easy to acquire multiple phone numbers from network providers as per government rules.

This way, your phone number privacy is sometimes violated even without your notice because when you are acquiring a phone number from a network provider, you need to show your documents that are issued by the government. Phone numbers can be easily tracked even when it has end-to-end encryptions. Only with the help of your phone numbers, your location can be trapped, or your phone may be exposed to malware attacks or SIM swapping attacks.

Nevertheless, phone numbers serve as great identifiers when it comes to joining a social networking site or an instant messaging tool like WhatsApp, but for people looking for the most private messaging app to keep their data secure even from the government, using phone number identifier is not a worth option – this is where the Status messenger wins. It uses a randomly generated crypto-key pair as the user’s identity. This chat key, which is a 65-byte uncompressed ECDSA secp256k1 public key, is the only identification that the user is represented with, and it has nothing to do with his real-world identities like name, phone number or email address.

As the chat key has no connection with the user’s original identities, they provide a high level of security being pseudonymous. However, the user can customize his chat key by attributing his details, but that is not mandatory. On the other hand, users who are more into social sites find the Status messenger inconvenient because chat keys fail to inherit the user’s social network from his phone’s contact list. They prefer Signal messenger just for the sake of convenience but at the cost of their privacy.

Signal somewhat solved this issue by launching PIN features into its ecosystem that allows the users to keep a backup their profile settings and contacts on the server so that they can again be reinstalled on a different device without revealing the personal details like name or phone number of the user to any of the servers. Status messenger lays more emphasis on the privacy factors and is meant for those users who do not want to be identified easily by their friends by their names, phone numbers, or email addresses.

The Status team is continuously making efforts to reduce the features disparity with other popular messengers like the Signal.