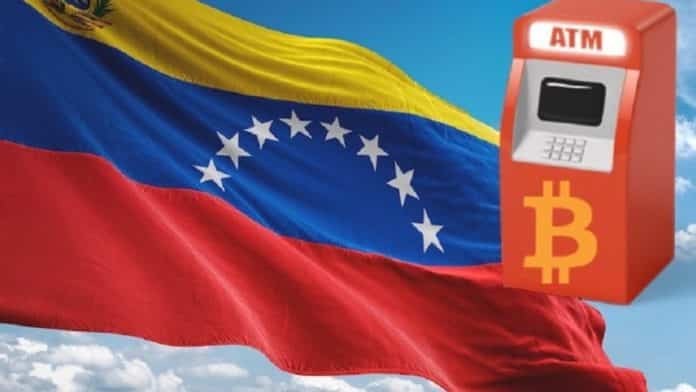 Venezuela’s first-ever Bitcoin ATM has been installed in a convenience store called Viajes e Inversiones HC in the town of San Antonio Del Táchira, on the border with Colombia; by Latin American firm Panda BTM. That follows record growth in bitcoin transactions in the last eight to ten weeks in Venezuela.

While Colombia has 53 bitcoin ATMs, the highest in Latin America; Venezuela has got its first one. Previously also attempts were made to install bitcoin ATMs, but all of them had failed.

Venezuela has been in an economic crisis with its currency in free fall, shortages of various goods leading to millions fleeing the country after the US imposed additional sanctions on Venezuela which made it impossible for the country to get debt. Venezuelan President Maduro had put forward the idea of a national cryptocurrency which would be backed by the country’s substantial oil reserves. A cryptocurrency which would avoid sanctions imposed by the US. Subsequently, Venezuela launched Petro in February this year becoming the first nation in the world to have a national cryptocurrency.

Maduro has been pushing for adoption of Petro for several types of transactions. Like for passports, fuel at the border, etc. mainly to avoid high exchange rate of the bolivar.

Foreign governments have expressed reservations over the sustainability of Petro. The US has banned its citizens from carrying out transactions in Petro. Thus, growth in Petro has not been as strong as Maduro would have hoped.

Venezuelans may have been lukewarm to the Petro but have seen the benefits of transacting in cryptocurrency. Especially when compared to currency as devalued as the Venezuelan Bolivar. Which explains the record growth in bitcoin transactions in the last seven to eight weeks.

The growth in Bitcoin transactions is set to continue as Maduro has ordered Venezuela’s largest bank, Bank of Venezuela to open counters for Petro transactions at all its branches. He has urged Venezuelans settled abroad to send money back home in Petro and not in bolivars to avoid the high exchange rate of a falling bolivar.

Simultaneously, Venezuela has also moved WTO against sanctions imposed by the US on Petro.

Thus, if Venezuelans settled abroad ditch the bolivar and adopt Petro, it could lead to massive growth in Petro transactions which will bring much-needed revenue to Venezuela. In a way, US sanctions would end up strengthening Maduro.

Thus, with Maduro, pushing for growth in Petro transactions and bitcoin growth already at record levels it seems that the ATM in San Antonio Del Táchira will be the first of many more to come.