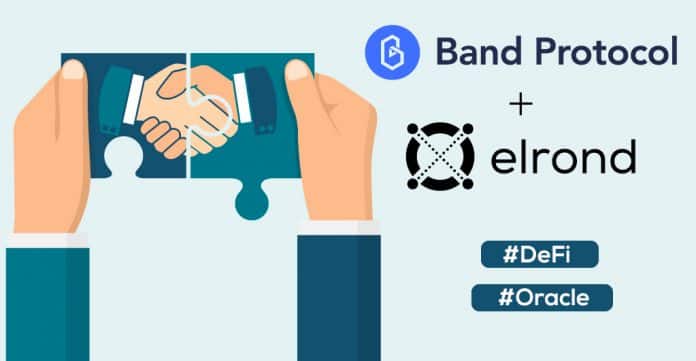 The blockchain platform Elrond has extended its partnership with Band Protocol, a cross-chain data oracle platform, by integrating Band oracles with Elrond mainnet. With Band oracles, Elrond is hoping to improve existing data availability and scalability of its decentralized applications (dApps).

Band oracles are designed explicitly for Elrond dApps as they are highly efficient, secure, and customizable, making them critical to the Elrond blockchain ecosystem.

Elrond integrated Band Protocol’s oracles as a part of its efforts to accelerate adoption and enable multiple dApps. Before this integration took place, developers at Elrond were bound to rely on predetermined datasets. As a result, they had to confront issues prominent in blockchain-based oracles like delayed data, high costs, or scalability.

Both Elrond and Band Protocol entered the partnership to facilitate the BandChain bridge implementation and provide support to Elrond developers.

The Elrond-Band Protocol collaboration will work and which tasks it aims to complete can be well understood as follows:

Elrond’s integration of Band Protocol’s end-to-end customizable oracles will allow developers to bridge reliable off-chain information into smart contracts in a more secure and scalable manner. Not only this, but developers can also use information in useful trustless scenarios such as rain data collected by IoT sensors that can be used to enable insurance payouts for droughts or floods in a decentralized insurance product.

According to Elrond CEO Beniamin Mincu, the enhanced security and scalability of Band oracles make them ideal for Elrond developers. He revealed how cross-chain data availability would accelerate the adoption of DeFi and enable the development of multiple dApps on Elrond mainnet.

Soravis Srinawakoon, CEO of Band Protocol, believes that this collaboration will provide Elrond developers with tools to bridge reliable off-chain and real-world information into Elrond mainnet in a reliable, secure, and scalable manner.

As developers will custom use oracles to use reliable data sources in useful trustless scenarios for deploying business processes and settling value transfer, it will authenticate end-to-end tamper-proof decentralized process logic execution.