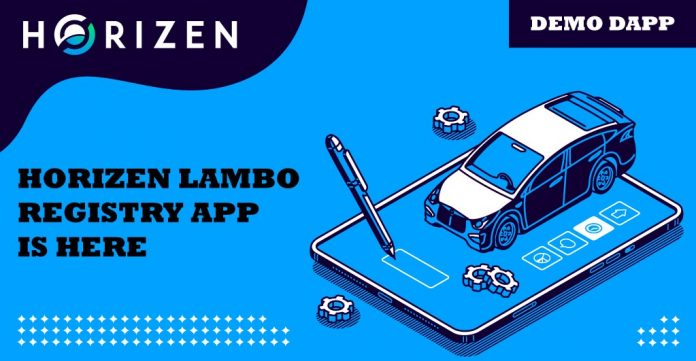 Horizen, the leading cryptocurrency and Sidechain platform that enables the deployment of private and public blockchain networks, has again made headlines and this time for a more innovative cause.

The platform has launched its first-ever blockchain-enabled demo app called the Lambo Registry app. It is the first demo dApp that has been developed using the Zendoo SDK, a sidechain solution of Horizen providing tools for verification of sidechains by the mainchain.

The newly launched Lambo Registry App is especially a demo car registry app that will enable users to store important information like the VIN (Vehicle identification number) or other information about the model number or color of the car, year of manufacture, etc. This app is developed to ease the car identification process where the car owners can quickly establish ownership of their vehicles without disclosing their identities; this is possible only because the app is based on decentralized technology.

The Lambo Registry demo app is more like a test drive that Horizen uses to prove its amazing potential of Sidechain technology customization of SDK. Horizen developed this car registry app to encourage the developers to develop apps in whatever field they are convenient in building various architectures on the Horizen platform.

A live webinar will be hosted by the Horizen team to give the developers tutorials on how to develop a dApp project on the Horizen platform using Zendoo SDK features. It will also demonstrate to the developers about the introduction of custom transactions, proofs, and propositions relating to the setting up of a decentralized app. It will help the developers to gain valuable insights about how to define APIs to do logic operations.

The Horizen engineering team will also provide technical video tutorials, supporting articles and documents to aid the developers in their efforts to build various decentralized applications on the platform. The team also announced to post bounties on HDE for the launch of the Lambo Registry dApp.

Before launching this Lambo Registry App, Horizen tried its hands in developing a smartphone app, which went on very successfully. The app used the IP address of Horizen to make or receive calls. The app proved to be very useful to keep people connected even from remote areas where installing a handset is not possible.