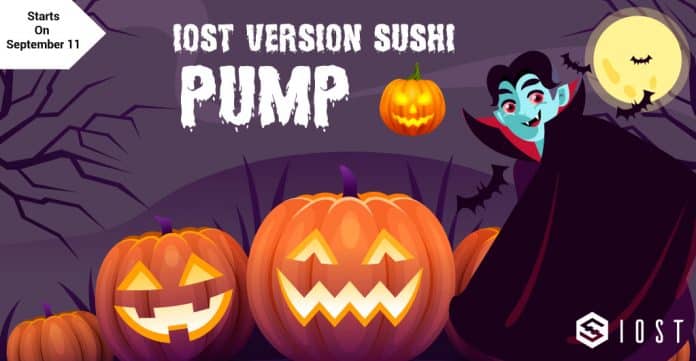 IOST has announced the official release date of Pumpkin Pump.

According to the announcement, IOST is set to launch Pumpkin Pump, a simplified and upgraded version of its SushiSwap, on September 11. The new version will be launched on the IOST network for the whole community.

With this upgrade, the company is hoping to deliver a simplified user-experience while cutting over network congestions. With a negligible fee involved, the users will be able to bring high yield to their business perspectives in the competitive DeFi ecosystem.

Talking about IOST, it is a decentralized blockchain network which is extremely fast and is built over the next-gen algorithm PoB (Proof of Believability). Since its inception, the sole motive of this platform has remained to serve the surging needs of the security and scalability of a decentralized economy. Undoubtedly, the world of established business models has been changed dramatically with the introduction of DeFi and yield framing. Many business entities and individuals are in a constant need of liquidity mining purposes, with lesser network congestion. And, Pumpkin Pump is all that is required today to develop and launch vibrant dApps.

Pumpkin Pump is developed by Pumpking, a new partner of IOST. The sole motive of this launch is to provide a simple DeFi staking and mining experience for the users. The workflow of the Pumpkin Pump will be similar to that of IOST tokens. Now Onwards, every time you use IOST to provide liquidity and staking IOST, you will receive a pumpkin as a reward immediately. And, there will be no handling fees involved, zero congestion with an assured high yield. This innovation of IOST is a direct competition to the ETH model where the handling fee is too high and the network is congested every time. If you are also one of those users, it is time to make a shift to IOST’s newly launched Pumpkin.

The official launch date of Pumpkin Pump is September 11th. For more updates on the same, you can join the announcement channel of IOST here!